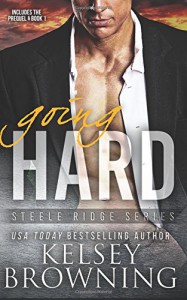 *Disclaimer: I received an eARC of this book from Netgalley and KickSass Creations in exchange for an honest review. This does not influence my rating or the content of my review in any way.

My first ARC August read and we're on a really good start. While the hidden baby trope is not one of my favorites in romance books, I have to say that Browning did a great job at writing it.

Now, while I don't think Carlie Beth made the right choice, I do understand where her nineteen-year-old-self was coming from. I don't agree, but I get it. All of that aside, I liked Carlie. She was funny, she was a good mother, and a good friend.

Grif was an interesting hero, full of contradictions. I'm curious to see if in the next books in the series this aspect about him is explored, but he seemed like a chameleon to me. When the book starts, we meet him talking on the phone with one of his clients, and by that small interaction, I was expecting a cold, stand-offish guy. Except the more time he spent with his family, back in his hometown, the more laid-back he turned out to be, so I'd love to see him in a big city environment, just to see if somehow he becomes a different person in any way.

Throughout the book there are such hilarious moments that I found it hard not to start laughing like a loon in the middle of the night, which I liked because it's been a while since my last laugh-out-loud read. The story is pretty fast paced, which is also a good thing, but I felt like the ending was a little bit abrupt. I would have wanted a "several weeks/months/whatever later" scene, but I guess that maybe we get that in the next books. I didn't expect the stalker to turn out to be who it turned out to be, which is a plus (I was completely pointing the finger at some innocent person).

I would have wanted to see more bonding moments between Aubrey and Grif, but all in all I enjoyed this book and I'll definitely read the rest of the books in the series, because I need more Reid in my life, Reid being one of Grif's brothers.